“Water is the driving force of all nature,” said Leonardo da Vinci. Five centuries later, Nhat Vuong, Founder of Water Inception, understood and interpreted this simple yet powerful thought in his own way.

From a family of the first refugees to Switzerland at the end of the Vietnamese War, Nhat was born in a refugee camp in Kuala Lumpur. He studied in Lausanne and Tokyo, and eventually got into the web and marketing industry, combining both to start his first social company. It was a crowd-funding platform for Japanese charities in 2012 when tsunami hit the island.

Upon his return to Switzerland he had worked as a web-marketing consultant for two more years until he discovered a machine invented by a Spanish retired engineer that has the potential to solve the world water crisis. This incredible machine can produce up to 10 000 liters of potable water by condensing the humidity from the air. In addition, they can even work in the desert and are powered entirely by solar energies. This prompted him to look into the world water crisis and the discoveries he made about the seriousness of the situation, made him decided to change career and do something about this water crisis. 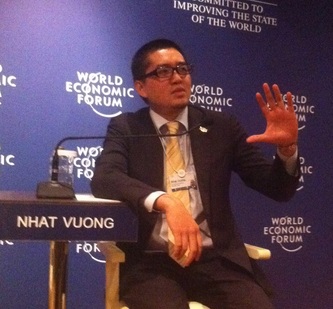 What is the mission and vision of Water Inception?

Water Inception aims to provide this technology to countries, where water scarcity is an imminent problem. We are going to work with local NPOs and find ways to bring this technology within their projects. One of our own project is to open water shops and hire local women who normally spend their days fetching water and empower them through their job. I strongly believe this will help eventually end the poverty cycle in these regions. We are also exploring combining our water generators with other companies working on sustainable technologies.

Water Inception is still in its ‘inception’ stages; what is the next planned step?

We are currently working on the logistic to bring a machine in Switzerland and we aim to organize a massive event to demonstrate its impact in front of the UN. We want to invite local personalities and show how it works before launching a crowdfunding campaign to finance an installation in a refugee camp or a school in an emerging country. The priority at the moment is to make this technology known and famous worldwide to welcome inquiries for collaboration from international organizations and governments.

Are you presently working or partnering with any such entities?

We collaborate with the Spanish company and recently we’ve been having discussions with a non-profit organization in India which is interested in including this technology in one of their projects.

I would like to start contacting schools in Switzerland to teach our students about the dismal water situation and see if there is any way to establish partnerships between Africa and schools here so kids can fundraise together, help each other, and learn from each other. I am also looking into creating links between emerging countries and Switzerland/Europe.

What have been the main challenges to date?

Lack of prior experience in the water sector makes this whole initiaive a challenge. I am learning about a sector that’s completely new to me and striving to understand the best channels to promote this technology,, who the influencers are, and what the characteristics of this niche market are but that makes the whole project an exciting journey.

What keeps you motivated and persistent?

What keeps me going is my own vision of a fully autonomous comfortable modern house that is easy to live in, that provides my own water, food, electricity, and where I can experience the sense of liberty, freedom, and happiness. I am committed to proving to myself that this is achievable and then I of course want to help others provide the same for themselves.

Ultimately, the world I want to build is a world where we are autonomous. Thus, we don’t need to care about having a salary to pay the bills. We work enough to live and spend more time on doing what we are passionate about. I think Water Inception can be a step towards creating this world.

What does leadership mean to you?

Inspiring other people to achieve a goal.

A leader is someone with a meta vision of the world that is so inspiring that people follow him/her. A great leader is also someone who knows who he/she needs to be surrounded by in order to attain the goals he/she has set out for him/herself.

Do you see yourself as a leader?

I don’t think I am a natural leader. That being said, when a vision is strong enough, anyone can become a leader.

I often thought that leadership was strongly linked to charisma until Elon Musk came along.  He isn’t especially eloquent  as Jobs but if you really listen to what he has to say about his goals, you realize he is a huge dreamer. He made me realize leadership isn’t just about charisma , but about a vision and ability to bring the right people together.

I do, however, think of myself as water inceptioner. I love the movie Inception; I like the idea of planting a seed about water – Water Inception – in the mind of people.

What would you say to someone who has an idea for a project or an organization but is afraid of failure?