The screen above the stage showed the audience a picture of a little eleven-year old boy dressed modestly, crying tears of exhaustion, hopelessness and fear. Sitting in a comfortable chair on the stage in a suit and tie was Tenzin, a student of translation and political studies at the University of Westminster in London, England remembering the moment depicted in the photograph when his and his older brother Pasang’s quest for freedom had run into a cruel impasse. “Look at Tenzin, [only] 11 on the screen and he is now [here with us]; he’s wonderful,” said Nick Gray, an award-winning documentary-maker and now first-time author of A True Story: Escape from Tibet,  encouraging a warm round of applause echoing through Knox Presbyterian Church on a soggy Saturday afternoon. 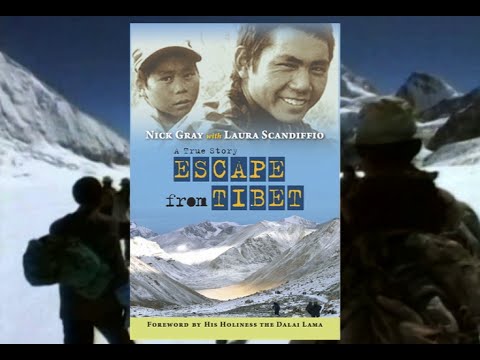 Prompted by the host, his sister Charlotte Gray , Nick read a short passage from the book which he wrote several years after the documentary had been made as it is “the only book of its kind,” taking the reader on a long tiring journey through the most daunting escape route in the world, the Himalayas. The passage Nick shared described an encounter of Tenzin and Pasang with the Chinese guards. Soaked, beaten, distressed, hungry and frightened, Tenzin was losing every hope of ever achieving freedom. At that moment he wished to go back to their village to live with their mother and work in the fields but Pasang offered an alternative: they were going to persist and pursue studies in a monastery in Lhasa. Thus, the treacherous journey continued.

Nick met them on the top of a mountain pass after the boys had already spent over three months climbing through an extremely difficult terrain struggling to reach safety and freedom. Sadly, this was nothing unusual; in fact, one third of Tibetan escapees are children who set out on a hike across the mountains wearing pathetic shoes, suffering from snow blindness, and often perishing during their brave flight from Chinese oppression. Having listened to the story from both Nick and Tenzin’s perspectives, it became hard to believe that the well-educated multilingual young man sitting before us had endured so much in his childhood. It took Tenzin and Pasang months to get to India only to find out Tenzin was going to have to return and face all the embarrassment and abuse on Chinese hands again due to inadequate paperwork. Finally, an audience with Dalai Lama allowed both brothers to stay in India as refugees. Tenzin wiped the tears of despair for “the sun came out, our mood suddenly lifted and we saw a new frontier.”

The production of this documentary was unlike any other. In order to be able to show people’s faces without shading them and exposing them to the possibility and danger of execution, abuse or exile, the filming took place outside of Tibet. Tenzin and Pasang, while sensing the involvement of some Westerners in their journey, were not aware of being showcased in a documentary. As a matter of fact, when they first came across Nick, they didn’t recognize the video camera; they did, however, notice a ‘weapon’ on a tripod. It wasn’t until a copy of the video was sent to the monastery through Pasang’s friend in 1996 that Tenzin watched himself on TV for the very first time. The powerful message of the film was spreading through the UK as well as the United States; the documentary was shown repeatedly, including at the State Department and the White House where Hillary Clinton had watched it before her visit to Nepal. Suddenly, the boys began receiving letters, money and even chocolates. Eventually, they were sponsored to come live in England and arrived to London on one cold November afternoon.

The brothers still live there, Pasang working and Tenzin studying, and have visited their mother in Tibet many times since their escape. “She is an amazing, remarkably resilient woman,” says Nick who fondly recalls their first encounter. He smuggled a photograph of him and the Dalai Lama into Tibet. When she saw the picture, she grabbed it and “put it on her head as a blessing.”

What impressed me the most about Tenzin is how sincere, humble and grateful he is – for the crowded subway he has to take to school every day, for the enriching experience the University of Westminster has provided him with, for the opportunities that have been presented to him. While it is important his communication with Tibetan support groups remains limited, I am so glad that he and Nick came to speak to us openly about the difficult destiny of the Tibetan refugees and let us be part of this incredibly touching story of courage, resilience, hope, and friendship.